‘The time has come,’ the Walrus said, ‘To talk of many things”

Yes, the time has indeed come.

My time with Microsoft started way back on 1991, in Canberra, as a Systems Engineer. I was the first technical guy in a small team of 4 people. I got to Canberra after I had followed a girl (who I had met in Melbourne) all the way to Canberra., That girl became my wife, and over the journey we’ve spent time in Seattle, Sydney, Seattle again and ultimately Melbourne, which is where I started. Funny that.

Along the way we had 4 children who have grown up immersed in all things Microsoft – they all have their Nokia Lumias, and Windows 8 tablets, and love their XBOX, I don’t think this will change in a hurry.

And then, there’s my other family – the awesome evangelists I hired, the community members who helped spread the word of the Microsoft platform – from .net, hailstorm, silverlight, to windows phone, windows, windows azure, and everything else in between.

Thank you all for making my Microsoft time very enjoyable and not feel like just a job.

This week also sees TechEd on the Gold Coast – and while I am there, we recorded the 100th episode of Frankly Speaking with my good friends Andrew Coates and Michael Kordahi, where I speak with the guys about my time at Microsoft. I had fun recording the session

I now have a chance to look around, smell the roses and find that next great job that isnt really a job which I can commit my heart and soul into, just like the last one.

I’ve said it before, and I’ll say it again.

I bought a house.

My first child was born

The resume stays the same, but I’m now back in Australia, based in Melbourne.

This year, I find myself in a different situation — I don’t have an office, so no 20lbs of M&Ms sitting in a bowl outside my door to share with my work colleagues.

It’s kinda weird that I have no one to share the moment with. It’s just another day.

But, I did get a rather large and heavy parcel sent to me. 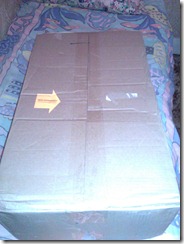 which had another box inside

and inside that box was another box addressed to me

Well – it’s my 20 year “crystal” from Microsoft. (yeah – crappy photo, I know. I’ll take another one in the morning)

So – 20 years down, and the future looks promising – skype is joining the family, kinect is going gang busters with it’s own SDK , windows phone is getting Angry Birds soon.

Seems like there’s a lots to still do, and I’m pretty excited to continue doing it.

Plus, now that I’m back in Australia – I can get along to some local events, such as DDD Melbourne, PREMIX & REMIX

I made the long trip to the Mandalay Bay Resort in Las Vegas, which is where MIX 11 is being held this year.

It should be a good one this year – the sessions look great and the keynotes are not to be missed.

I said it before, and I’ll say it again – the team missed an opportunity to play with the name with some good old fashioned roman numeral hijinks.

The team had a bit of geek fun last night.

We are all together for TechReady, a bi-annual get together of the Microsoft Technical community.

One event we have is called “ASK THE EXPERTS” and to help folks find us, we innovated with signage.

The event organizers were not amused but I was… 🙂