It’s been a mix of on-boarding, travel, working with my team, learning what needs to be done, and culminated with a few days last week at AWS Summit in SYDNEY

Looking back at my TripIt stats, it kinda says it all…..

Since starting the new role, I’ve been on the look out for a new avatar.  I had to leave my old ones, and I had been using a temporary one which I kinda liked (can anyone guess where it’s from?)

So I need a new look.

I had a bright idea — I went to fiverr, and using the same photo, I got a few different avatars. I tried Simpsons style, Archer style, flat style, shadowy, artistic, cartoony, but I must admit I really really love the Bob’s Burger style – So that’s the one in the top left…  My family reckons is a good likeness too – it’s a keeper. Expect to see it everywhere

And speaking of seeing it everywhere, I helped designed a burger for Royal Stacks (Yes i know right).  It’s called the QWERTY, and available only for the month of April! The burger is pretty awesome if I say so myself 🙂 #AchievementUnlocked 🍔

Now, one of the things that has really struck me is that Amazon, and therefore AWS, is that it is a bit “peculiar”. I like that, maybe because I’m a bit peculiar too. I’ve always felt like the odd one out. Now I feel I’m among “my” people, and the things that really contributes to this is the collection of Amazon Leadership Principles – they are not just a sign on a wall, but something used every day at Amazon. Some of these principles represent things that are inside a person (call it values if you will) and some are learnt behaviours. As a result, there’s a common sense of purpose, a common language, a virtual shorthand that unites everyone. 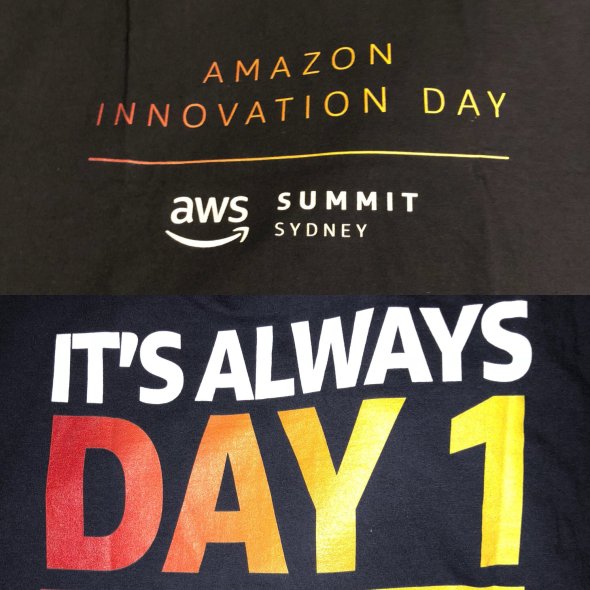 It’s been 1337 days since i started at Telstra, to be part of the team working on the API Strategy and it feels appropriate on this 1337 d4y5 1337 d4y5 47 73l57r4 to see the next chapter of the API work be written, with Steve Cooper, aka @DeveloperSteve coming onboard to take this to the next level as the API and Platform Evangelist at Telstra. Welcome Steve – looking forward to seeing things move ahead.

Back in September 2016, I moved into a new role as a member of the Innovation team at Telstra, in the Chief Technology Office, located in the Gurrowa Innovation Lab in Melbourne.

Well a lot has happened in those 12 months! We built a new team, re-launched the lab with a new sense of purpose & vigor, and began to inspire the next generation

We also hosted many events, and lucky for me, I was able to capture a “moment” of just some of these

It’s been a full 12 months, with a lot more to come

A few weeks back my daughter Emma was playing a simple yet addictive game on her PC, called 2048.

She wrote about it on her aussiegeekgirl blog , comparing it to another recent addictive game, flappy bird.

Now in the past few days, others have been writing about this addictive game

But I know where I heard about it first – my own Emma!!

I’ve been helping my kids with their homework, and one of them (I wont name who, so as to avoid any embarrassment) had to deliver a presentation in PowerPoint. I wanted to add a bit of pizzazz to the experience looked at hooking up a Kinect so that they could present with gestures, rather than clicking with a mouse.

I grabbed the Kinect for Windows SDK, and went looking on codeplex for kinect related samples, where I found the Kinect PowerPoint Control. It was nice, but It didn’t do exactly what I wanted.

By coincidence, Dr Neil sent me an email about nsquared slyda, which just lets me change between slides using hand gestures.

We had a practice session and kiddo can move forward and back, with a wave of the hands.

Next stop, the classroom!!!

BTW – I see that boffins at nsquared solutions are working on more Kinect apps. I got a ping last night from Dr Neil about nsquared spydar, which is like the Coding4Fun Kinect Turret minus the violence.  I got it set up – now let’s see who comes and uses my PC when I’m away….

How can I not contribute to this worthy cause……

The year  was 1981, and my high school, CBC StKilda,  got a fancy new Cromenco computer system. I was asked to man the computer lab by my math teacher, Mrs Fagin, and to pass the time, I wrote programs in Structured Basic.

I remember putting in programs that would  to print out ASCII art – playboy bunny logo and Alfred E. Newman stick in my memory.  After spending time playing in that lab, I decided to following a computing path, even though I had been planning to go on and do medicine.

I signed up for the EDP (or Electronic Data Processing) course at CIT in 1982. In my first year we used punch cards to input out programs. I still have some those punch cards someone in the garage – I’ve carried them for almost 30 years!  In my second year, the class had access to time sharing terminals connected to a PR1ME computer and we worked on PR1ME Information (which was similar to PICK), as well as COBOL and FORTRAN, and in my third year, we had a dedicated Data General system,  we programmed in COBOL and PL/1 and we had access to a new fangled a IBM PC and a software package called KnowledgeMan for our group project.

After graduating, I entered the workforce as a humble programmer and my first job was converting FORTRAN applications for an engineering company on St Kilda Rd, who were migrating systems. That was the start of many projects during my time

So there you have it….

Mayorships up for grabs

I love playing foursquare, and I have just started using a wonderful foursquare app on my Windows Phone called 4th and Mayor.

Anyways, since I’m leaving town, the mayorship of the spots will be up for grabs.

I would love to see how long it takes for all these go – a week? a month? a year?

The team had a bit of geek fun last night.

We are all together for TechReady, a bi-annual get together of the Microsoft Technical community.

One event we have is called “ASK THE EXPERTS” and to help folks find us, we innovated with signage.

The event organizers were not amused but I was… 🙂 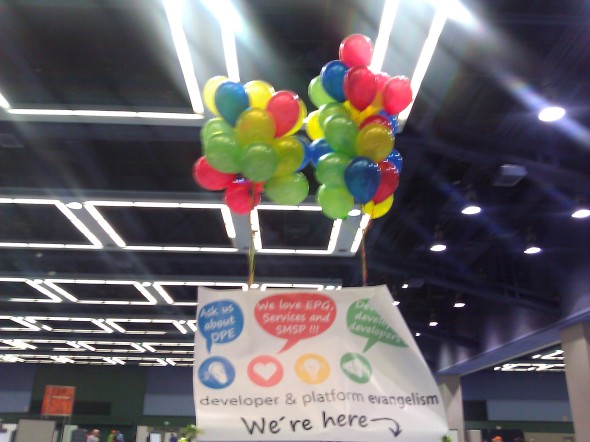 I picked up a new toy today – an Asus eee slate. I got it from the Microsoft store in Bellevue.

Off to play, more info later